HomeTimeTravelTime Travel - Is it Real?

Time Travel – Is it Real?

Can we travel through time, have humans already travelled through time and are there conspiracies to suppress the truth?

From Wikipedia, the free encyclopedia
There have been various accounts of persons who allegedly travelled through time, reported by the press or circulated on the Internet. These reports have generally turned out either to be hoaxes or to be based on incorrect assumptions, incomplete information, or interpretation of fiction as fact, many being now recognized as urban legends 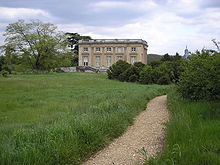 The Petit Trianon in 2005, where the incident purportedly took place.

The Moberly–Jourdain incident, or the Ghosts of Petit Trianon or Versailles (French: les fantômes du Trianon / les fantômes de Versailles) refers to claims of time travel and hauntings made by Charlotte Anne Moberly (1846–1937) and Eleanor Jourdain (1863–1924). In 1911, Moberly and Jourdain published a book entitled An Adventure, under the names of “Elizabeth Morison” and “Frances Lamont”. Their book describes a visit they made to the Petit Trianon, a small château in the grounds of the Palace of Versailles where they claimed they saw ghosts including Marie Antoinette and others. Their story caused a sensation, and was subject to much ridicule.

In October 2010, Northern Irish filmmaker George Clarke uploaded a video clip entitled “Chaplin’s Time Traveller” to YouTube. The clip analyzes bonus material in a DVD of the Charlie Chaplin film The Circus. Included in the DVD is footage from the film’s Los Angeles premiere at Grauman’s Chinese Theatre in 1928. At one point, a woman is seen walking by, holding up an object to her ear. Clarke said that, on closer examination, she was talking into a thin, black device that had appeared to be a “phone“.[1] Clarke concluded that the woman was possibly a time traveller.[2] The clip received millions of hits and was the subject of televised news stories.[3]

Nicholas Jackson, associate editor for The Atlantic, says the most likely answer is that she was using a portable hearing aid, a technology that was just being developed at the time.[2] Philip Skroska, an archivist at the Bernard Becker Medical Library of Washington University in St. Louis, thought that the woman might have been holding a rectangular ear trumpet.[4] New York Daily News writer Michael Sheridan said the device was probably an early hearing aid, perhaps manufactured by Acousticon.[2] 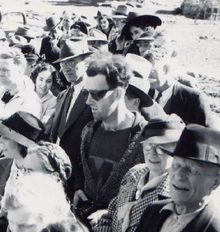 A photograph from 1941 of genuine authenticity of the re-opening of the South Fork Bridge in Gold Bridge, British Columbia, was alleged to show a time traveler.[5] It was claimed that his clothing and sunglasses were modern and not of the styles worn in Their Past Lives Here, produced and hosted through investment by the Virtual Museum of Canada (VMC).[6]

Further research suggested that the modern appearance of the man may not have been so modern. The style of sunglasses first appeared in the 1920s. On first glance the man is taken by many to be wearing a modern printed T-shirt, but on closer inspection it seems to be a sweater with a sewn-on emblem, the kind of clothing often worn by sports teams of the period. The shirt is very similar to the one that was used by the Montreal Maroons, an ice hockey team from that era. The remainder of his clothing would appear to have been available at the time, though his clothes are far more casual than those worn by the other individuals in the photograph.[7]

Debate centres on whether the image genuinely shows a time traveller, has been photomanipulated, or is simply being mistaken as anachronistic.[7] The “Time Traveling Hipster” became a case study in viral Internet phenomena in museums which was presented at the Museums and the Web 2011 conference in Philadelphia, Pennsylvania.[8]

The story of Rudolph Fentz is an urban legend from the 1970s and has been repeated since as a reproduction of facts and presented as evidence for the existence of time travel. The essence of the legend is that in New York City in 1951 a man wearing 19th-century clothes was hit by a car. The subsequent investigation revealed that the man had disappeared without trace in 1876. The items in his possession suggested that the man had traveled through time from 1876 to 1950 directly.

The folklorist Chris Aubeck investigated the story and found it originated in a science fiction book of the 1950s, A Voice from the Gallery by Ralph M. Holland, which had copied the tale from “I’m Scared”, a short story by Jack Finney (1911–1995), from which the Fentz tale originated.[9]

Alleged UFO contactee and prophet Billy Meier claimed that while taken into outer space by extraterrestrials, he traveled back in time, saw and photographed dinosaurs, and met Jesus Christ.[10]

Between 2000 and 2001, an online bulletin board user self-identified as John Titor became popular as he claimed to be a time traveler from 2036 in a military mission. Holding the many-worlds interpretation as correct and consequently every time travel paradox as impossible, he stated that many events which occurred up to his time would indeed occur in this timeline. These included a devastating civil war in the US in 2008 followed by a short nuclear World War III in 2015.[11]

In the years following his last posts and disappearance in 2001, the non-fulfilment of his specific predictions made his popularity decrease. Criticism has pointed out flaws in Titor’s stories and investigations suggested his character may be a hoax and a creation of two siblings from Florida.[12]

To date, the story has been retold on numerous web sites, in a book, in the Japanese visual novel/anime Steins;Gate, and in a play. He may also have been discussed occasionally on the radio show Coast to Coast AM.[13] In this respect, the Titor story may be unique in terms of broad appeal from an originally limited medium, an Internet discussion board.

Similar to John Titor, Bob White or Tim Jones sent an unknown number of spam emails onto the internet between 2001 and 2003. The subject of the emails was always the same, that the individual was seeking to find someone who could supply a “Dimensional Warp Generator.” In some instances, he claimed to be a time traveler stuck in 2003,[14] and in others he claimed to be seeking the parts only from other time travelers.[15] Several recipients began to respond in kind, claiming to have equipment such as the requested dimensional warp generator. One recipient, Dave Hill, set up an online shop from which the time traveler purchased the warp generator (formerly a Hard Drive Motor), while another Dave changed thousands of dollars for him to take time-travel “courses” before he would sell the requested hardware. The name “Bob White” was taken from an alias that the second Dave used when responding (a reference to the “Bobwhites” of Trixie Belden-fame).[16] Soon afterward, the time traveler was identified as professional spammer Robert J. Todino (known as “Robby”). Todino’s attempts to travel in time were a serious belief, and while he believed he was “perfectly mentally stable,” his father was concerned that those replying to his mails had been preying on Todino’s psychological problems. In his book Spam Kings, the journalist Brian S. McWilliams, who had originally uncovered Todino’s identity for Wired magazine, revealed that Todino had been previously diagnosed with dissociative disorder and schizophrenia, explaining the psychological problems his father had spoken of.[16][17] Todino’s time traveller was referenced in the song “Rewind” by jazz trio Groovelily on their 2003 album Are we there yet? The song used phrases taken from Todino’s emails within its lyrics.[17]

Andrew Carlssin was reportedly arrested in January 2003 for SEC violations for making 126 high-risk stock trades and being successful on every one. As reported, Carlssin started with an initial investment of $800 and ended with over $350,000,000 which drew the attention of the SEC. Later reports suggest that after his arrest, he submitted a four-hour confession wherein he claimed to be a time traveller from 200 years in the future. He offered to tell investigators such things as the whereabouts of Osama bin Laden and the cure for AIDS in return for a lesser punishment and to be allowed to return to his time craft,[18] although he refused to tell investigators the location or workings of his craft.[19]

The Carlssin story allegedly originated as a fictional piece in Weekly World News, a satirical newspaper, and was later repeated by Yahoo! News, where its fictitious nature became less apparent. It was soon reported by other newspapers and magazines as fact. This in turn drove word-of-mouth spread through email inboxes and internet forums, leading to far more detailed descriptions of events.[20]

A video uploaded in 2006 shows a Swedish man named Håkan Nordkvist claiming that he had been accidentally transported to 2046 when attempting to fix the sink in his kitchen. There in the future, he immediately met someone who revealed and proved to be himself about 70 years old, and with whom he “had a great time”. He filmed a short footage of the two smiling and hugging each other and showing the tattoo they had in their right arm. The story was reportedly a marketing campaign promoting the pension plans of the insurance company AMF.[21]

Chronovisor was the name given to a machine that was said to be capable of viewing past and future events. Its existence was alleged by Father François Brune, author of several books on paranormal phenomena and religion. In his 2002 book The Vatican’s New Mystery he claimed that the device had been built by the Italian priest and scientist Father Pellegrino Maria Ernetti. While Father Ernetti was a real person, the existence (much less the functionality) of the chronovisor has never been confirmed.

In April 2013, the Iranian news agency Fars carried a story claiming a 27-year-old Iranian scientist had invented a time machine that allowed people to see into the future. A few days later, the story was removed, and replaced with a story quoting an Iranian government official that no such device had been registered.[22][23][24]

The Philadelphia Experiment is the name given to a naval military experiment which was supposedly carried out at the Philadelphia Naval Shipyard in Philadelphia, Pennsylvania, USA, sometime around October 28, 1943. It is alleged that the U.S. Navy destroyer escort USS Eldridge was to be rendered invisible (or “cloaked“) to enemy devices. The experiment is also referred to as Project Rainbow.[25] Some reports allege that the warship travelled back in time for about 10 seconds; however, popular culture has represented far bigger time jumps.

The story is widely regarded as a hoax.[26][27][28] The U.S. Navy maintains that no such experiment occurred, and details of the story contradict well-established facts about the Eldridge as well as the known laws of physics.[29] Nonetheless, the story has captured imaginations in conspiracy theory circles, and elements of the Philadelphia Experiment are featured in other government conspiracy theories.

The Montauk Project was alleged to be a series of secret United States government projects conducted at Camp Hero or Montauk Air Force Station on Montauk, Long Island, for the purpose of exotic research, including time travel. Jacques Vallée[30] describes allegations of the Montauk Project as an outgrowth of stories about the Philadelphia Experiment.

How To Time Travel | National Geographic